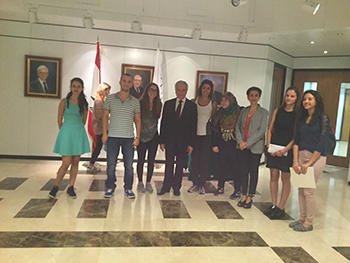 The first recipient of the Award was Caitlin Smith. She received it for Best Research Paper entitled “Situating Feminization of Migration from Southeast Asia within Migration Theories”, Caitlin sheds light on the lack of a gendered approach to migration, she invites academics and policy makers to stop considering the trend of migration rather than the determining factors behind individual decision to migrate, which affects significantly women. She focuses in her paper not on; “what makes women migrate”, rather on “what makes more women migrate than men?”

The second recipient was Maria Zmeter. She received the Award for Best Short Essay, Maria embarked on a critical analysis of Mona Elthaway’s work entitled “Why Do they hate us?” Maria’s paper not only challenged the author’s approach she also gave counter examples to support her claims, that women in the Arab world have witnessed minor advancements in the past decade. She calls for a revolution in the name of women, however social change, she explains, mustn’t breed aggression and hatred towards the opposite gender, asserting that we should thrive to a harmonious balanced and gender equal society.

In addition to the monetary prize of $250, both papers will be published in Al-Raida Journal.